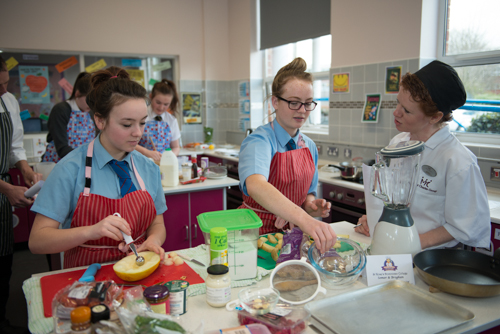 Initially a business that focused on catering, Mount Charles is particularly passionate about cooking as a career as well as healthy eating.

What Mount Charles did

Mount Charles ran a cooking competition in seven schools in the Belfast area. The schools were given a brief to create a healthy, locally sourced meal on a £5 budget.

Mount Charles chefs visited all seven schools and selected a pair to represent their school in the final.
The Final was held in St Rose’s Dominican College where the teams had one hour to whip up their meals, before a team of three of The Mount Charles Group’s most experienced chefs judged their efforts and named a winning pair.

“Overall we were very impressed with the standard and variety of meals cooked. It goes to show that healthy eating on a budget is totally achievable, it just takes a little imagination, something that each of our finalists obviously have in abundance. The pupils seemed to have loved the chance to cook and as a staff we have enjoyed being part of it!”
Marcus Lemon, Head Chef for The Mount Charles Group in the Waterfront Hall

Many of the schools that participated uploaded articles on their school websites with photographs from the events.